In the beginning, was a little girl that loved to entertain.  She was an actress on Nickelodeon, performed in stage plays and her voice was in several movies.  After a successful career as a child actor, she went on to attend Smith College, achieving a Dual BA in Spanish & Creative Writing from Smith College in just 3 years on the Dean's List. She moved to Los Angeles, California to pursue her acting career, so she thought, but was led to pursue Christ.  She began to narrate the Bible and work on projects of a spiritual nature.  Wishing to merge her passion for the performing arts and entertainment with a higher calling of spreading the word of God, Christian Children's Entertainment was born.  Christian Children's Entertainment is a division of Hillary Hawkins Production, LLC.  To Be Continued... 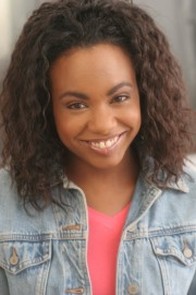 Hillary Hawkins is an actress, singer, songwriter, voice-over talent, screenwriter, playwright, producer and Child of God!  Well-known as Robyn, Host of Nick Jr., Hillary was on TV everyday introducing shows such as "Dora The Explorer," "Bob The Builder," "Little Bill" and more. She also was a Live Events Host for Radio Disney.
Hillary is passionate about creating positive Christian Children's Entertainment, programming, music and shows!  Some of the networks that have aired content created by Hillary Hawkins include ABC, CBS, NBC and FOX. Her short film "Stuck For A Reason" aired on National TV Show "African American Short Films." Glory be to God!  This 3X Voice Arts Awards nominee (Teens, Metaphysical & Author Performance Best Voice Over) has over 100 audiobooks on Amazon, iTunes and Audible including the 31 Bible Verses By Subject Series, children's books, spiritual self-development books and more!
​Hillary Loves spreading Love and the word of God through the arts and looks forward to entertaining YOU!  www.HillaryHawkins.com
CHRISTIAN CHILDREN'S ENTERTAINMENT CREATOR & PERFORMER, Los Angeles, California, New Jersey, USA, Worldwide